Home Sejarah The True History Of Islam In Indonesia

The True History Of Islam In Indonesia 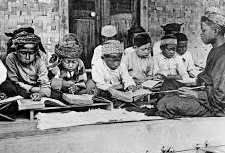 History Of Islam In Indonesia

In the year 30 Hijri or 651 AD, only about 20 years ago of the death of the Prophet Muhammad, Caliph Uthman ibn Affan RA send a delegation to China to introduce Islamic state that has not been long-standing. In the course, which takes four years, the delegates turned out to Uthman had stopped in the archipelago. A few years later, in the year 674 AD, the Umayyads had established a trading base on the west coast of Sumatra. This is the first introduction of the Indonesian population to Islam. Since then the sailors and Muslim merchants continued to arrive, century after century. They buy produce from the land of green this while preaching.

Gradually the indigenous population converted to Islam, although not on a large scale. Aceh, the westernmost region of the archipelago, was the first to accept Islam. Even in Acehlah first Islamic kingdom in Indonesia was established, namely Pasai. News from Marcopolo mentioned that during his sojourn in Pasai year 692 AH / 1292 AD, has many Arabs who spread Islam. Similarly, news of Ibn Battuthah, nomadic Muslims from the Maghreb., Which when stopped in Aceh in 746 H / 1345 AD wrote that in Aceh has spread Shafi. The oldest relic of Muslims are found in Indonesia are in Gresik, East Java. Tomb complex form of Islam, one of which is the tomb of a Muslim woman named Fatima bint Maimun. Written on his tomb figures in 475 H / 1082 AD, ie at the time of Singhasari. It is estimated that these tombs nonindigenous, but the tomb of Arab traders.

The history of Islam in Indonesia. Until the 8th century H / 14 AD, there is no indigenous population of Islam massive archipelago. Only in the 9th century H / 14 AD, the indigenous population converted to Islam en masse. The historians believe that Islam entered the archipelago population massively in the century because at the time the Muslims already have significant political power. Which is marked by the establishment of several Islamic kingdoms such as the Kingdom of Aceh Darussalam, Malacca, Demak, Cirebon, and Ternate? The rulers of these kingdoms mixed-blood descendants of the kings of indigenous pre-Islamic and Arab immigrants. The rapid Islamization of the 14th century and 15 M, among others, are also caused by the decline of the power and influence of the kingdoms Hindu / Buddhist in the archipelago such as Majapahit, Srivijaya, and Sundanese. Thomas Arnold in The Preaching of Islam says that the arrival of Islam not as a conqueror that the Portuguese and Spanish. Islam came to Southeast Asia by peaceful means, not by the sword, not to seize political power.
With the conversion to Islam Nusantara indigenous population and the establishment of Islamic governments in various regions of the archipelago, trade with Muslims from the center of the Islamic world closer together. The Arabs who migrated to the archipelago is also growing. The largest of which is derived from Hadramaut, Yemen. In Tarikh Hadramaut, migration is even said to be the largest in the history of Hadramaut. But after Christian European nations arrive and greedily controlled the area-by-area in the archipelago, the relationship with the center of the Islamic world as if disconnected. Especially in the 17th and 18th century AD. The reason, in addition to the Muslim archipelago occupied by the resistance against the occupation, as well as a variety of rules created by the colonialists. Each time the invaders - mainly Dutch subjecting Islamic kingdom in the archipelago, they certainly thrusting agreement which forbade the kingdom related trade with the outside world except through them. Then the Muslims archipelago relations with Muslims from other nations that have existed for hundreds of years. Colonialist desire to alienate Muslim's archipelago with its roots, also visible from their policies that make assimilation between Arabs with the natives.


Since the beginning of the arrival of the Europeans in the late 15th century AD to the fertile islands prosperous, had been seen gluttony them to master. Moreover, they found the fact that the islanders have embraced Islam, the religion of their enemies so that the spirit of the Crusades was always carried around every time they beat an area. In the fight against Islam, they cooperate with indigenous kingdoms are still adhered to Hindu / Buddhist. One example, to decide the shipping lanes of the Muslims, then after the control of Malacca in 1511, the Portuguese established cooperation with the Kingdom of Sunda Pajajaran to build a base in Sunda Kelapa.

But the Portuguese mean a total failure after joint forces of Islam from the north coast of Java Island shoulder to shoulder to demolish them in 1527 AD a great historic battle is led by a son of Aceh bloody Arab Gujarat, namely Al-Pasai Fadhilah Khan, better known as title, Fathahillah. Prior to becoming an important person in three Islamic kingdoms of Java, namely Demak, Cirebon and Banten, Fathahillah had time to sit in Makkah. Even to defend the Mecca of the Ottoman invasion.

The arrival of the colonialists, on the one hand, has instigated the jihad of the Muslims archipelago, but on the other hand, it makes the deepening of Islamic theology uneven. Only pesantren (madrasah) is steeped in Islam, and even then usually limited to Shafi. While the majority of Muslims, of mixing faith with pre-Islamic tradition. Prijajis near the Dutch even been infected with the European lifestyle. Conditions like this at least is still going on until now. Apart from this, scholars Archipelago is people who adamantly opposed the occupation. Although many of those who come from the congregation, it is among the congregations that often rise up against the invaders. And although in the end all this resistance was crushed by devious tactics, history has recorded millions of martyrs archipelago that fall on various battles against the Dutch. Since the opposition Islamic kingdoms in the 16th and 17th centuries such as Malacca (Malaysia), Sulu (Philippines), Pasai, Banten, Sunda Kelapa, Makassar, Ternate, until the resistance of the scholars in the 18th century as the War Cirebon (Good ranging), the Java War (Diponegoro), Padri War (Imam Bonjol), and the War in Aceh (Teuku Umar). (Source: ummah.com). The history of Islam in Indonesia