Home Pendidikan Recognize The Power Of The Subconscious

Recognize The Power Of The Subconscious 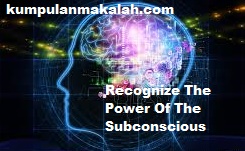 You have become a victim of the power of words that are very large.
This happens all the time.Let's say someone says / writes on the wall face book /twitter that you're a liar public. Although the allegations were not true, you're likely to feel angry or at least feel insulted.
But if you think about it, you have to admit that the only words / writing that makes you angry

words that do not describe reality at all.
That's because unconscious not distinguish between the idea is right and wrong idea.
But now let's look at another example of the power of words that are very large.
Someone says he loves you.

If you feel the person is attractive, your heart starts beating harder and you become excited.
But what is your reaction to these words? That person may be honest, or maybe just want to have fun - tease you.

But your subconscious mind accepts suggestions without asking and immediately translate them into signs which looks and easy to understand.
Let's look at two examples:

Your boss praised him for the work that you have done.
Although he may not really verbalize who uttered it, it still makes you feel happy.
Your confidence increases, and you do your job with even bigger enthusiasm.

A third example:
However a true story - even more dramatic.
A doctor tells a patient who came for a routine checkup that patients suffered mouth disease can not be cured, and according to estimates can only survive a few more weeks.
Of course the patient be surprised ...
How can a simple examination performed by a doctor who was able to produce a prognosis which is so drastically?

Patients feel healthy when he underwent surgery the doctor who performed it.
However, his life undergoes a transformation complete reply.
He was really sick - sick of serious. He immediately approached death, and maybe he really died if at the last minute not to say that doctors perform error-file file patient was confused with another.

This example proves that subconscious will accept all kinds of suggestions, although that is clearly wrong, especially if the suggestion was first accepted by the conscious mind.
In fact, if you think about a case that I have just described, the patient was almost "killed" by the simple words of a doctor; His subconscious do its work.

And this gives us another fundamental characteristic of mind unconscious.
It is important to understand if you use the power of Mind subconscious to your advantage, or if you want to be able to resist its influence in a dangerous situation.
This characteristic is very important in a situation that caused by others.
(And others, even those who are close to us and loves us though, rarely give effect to that really positively to the subconscious. Because they themselves often have a program that is negative, and do not realize the effect of their words to the people around them ).
The basic principle that I'm talking about is subconscious works like a magnifying glass - bring up anything that was underneath.

We have seen to what degree subconscious can raise a suggestion, especially if reinforced regularly (fortunately, can work in the other direction - positive or negative - depending on sugestion).

But we must remember that subconscious is reactive, and accept all the suggestions blindly, not picky. The application of this enlargement is an absolute principle.
From this moment onwards we should and must say positive words so that people around us are also getting positive ...

Mandatory for a hypnotherapist to say positive words, and give positive suggestions anytime and anywhere.